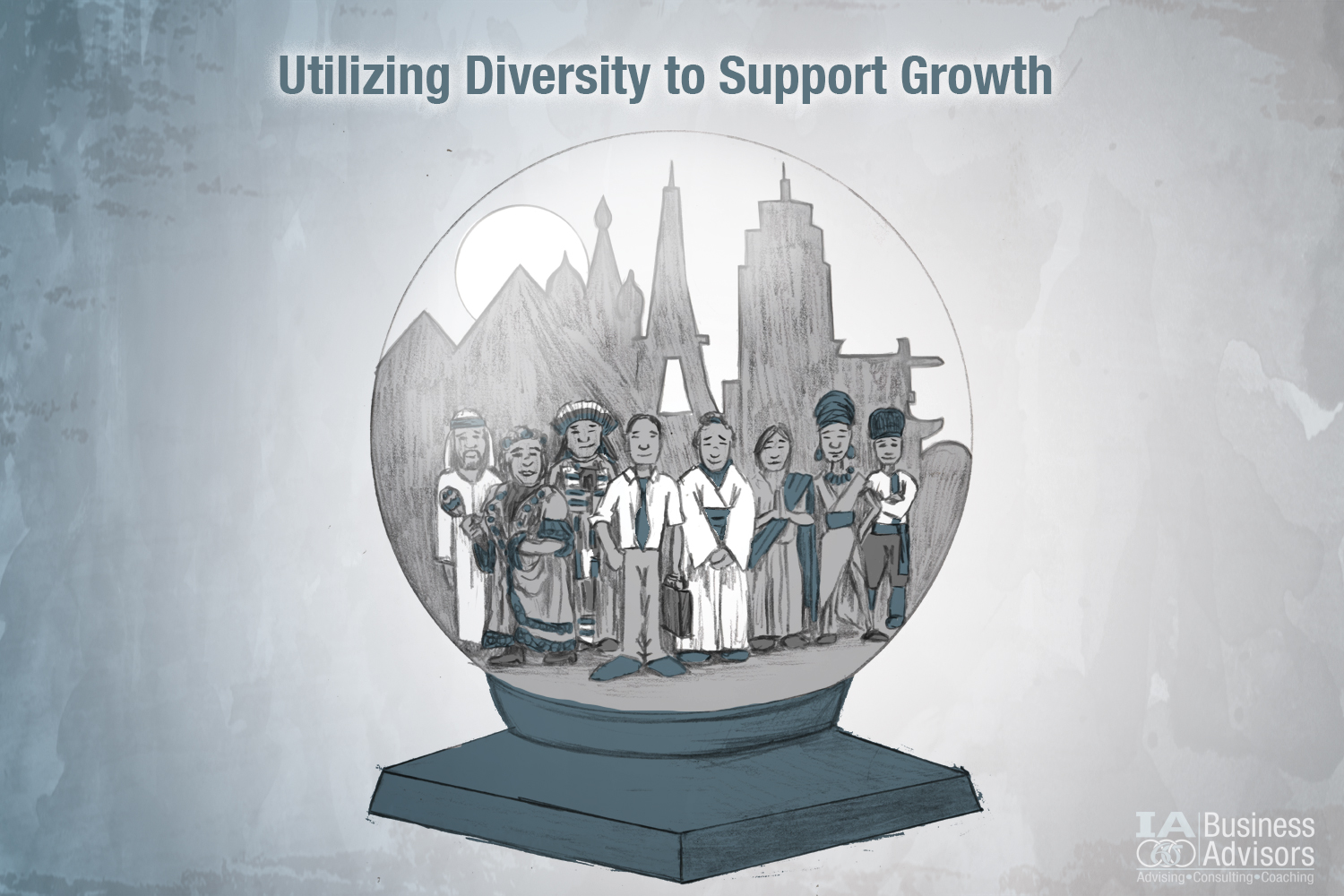 Several studies have demonstrated the benefits of supporting diversity and inclusion in the workplace, ranging from increasing your bottom line to attracting the best and top talent. We know our workforce is becoming more diverse in age, race, ethnicity, culture, and so much more as we move further into the twenty-first century. While topics of discussion in diversity are heavily focused on external qualities, such as gender, race, and age, what makes us diverse goes far beneath the surface. We are diverse in personalities, thinking styles, interests, preferences, and so much more.

We have internal and external qualities that define who we are, and it is this culmination that determines our personal culture. While discussing race and gender issues is important, I want to remind you that we have the opportunity to connect and engage in more areas. We have to remember that what we see on the surface is minimal compared to the universe of possibilities inside a person’s mind. Below are listed some internal and external characteristics that help make us diverse: 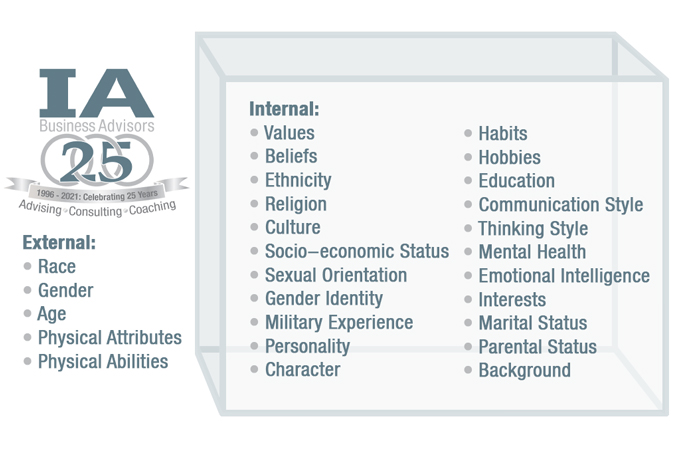 Keep in mind all that makes us diverse as we discuss the benefits of utilizing diversity to support growth in your business through the lenses of race, ethnicity, and gender. We will finish this article by discussing some of the problems you may run into when trying to make your team more diverse and challenge you to begin the conversation of diversity and inclusion with your team.

There are a few reasons that creative growth becomes stunted when there is a lack of diversity. First, creativity is stifled because each team member doesn’t feel pressured to think outside the box if they believe their team to be non-diverse. Second, each team member doesn’t feel compelled to prove their idea is worth it because they work on a team of people who are so similar to them that they know their idea will most likely be accepted and supported. This means that when we start to feel comfortable and realize that everyone thinks like us, we become more laid back and less likely to generate ideas that will be groundbreaking for our organization. By simply having and being aware of the presence of diversity, team members feel propelled to think bigger and through more lenses, rather than just through their and their non-diverse team’s lens.

Supporting, promoting, and facilitating diversity and inclusion is what consumers expect out of organizations. Not only are consumers polling at high levels of wanting to see diversity and inclusion in marketing, but top talent and employees are starting to care more about working in diverse and inclusive workspaces. This is because people want to feel comfortable being themselves in front of others. This isn’t solely true for minorities. I believe all people, whether they be in positions of power or not, crave a space where they feel safe being themselves. We spend at least a third of our lives at work and with our teams, so we should all strive to make these spaces as inclusive as possible for everyone to benefit from. By reflecting society, through organizational diversity and by giving consumers what they want, we take a great step towards creating an organization of belonging and inclusion.

You may be reading and thinking that finding, attracting, and hiring top diverse talent in your industry is close to impossible. For some industries, this is a hard truth! It’s certainly not impossible, but there are some industries that are so dominated by particular races and genders that minorities shy away from entering those industries, making diverse talent highly sought after. For example, women are underrepresented in tech. CIO discusses a report by the National Center for Women & Information Technology (NCWIT), which states that women make up roughly 47% of the workforce, but as of 2015, only 25% of women are in tech roles. Of those 25%, White women account for a majority at 16%, Asian women at 5%, Black women at 3%, and Hispanic women at 1%, respectively. This employment gap in the tech industry, for example, is becoming so well known that Google has been releasing an annual diversity report since 2018. Google’s Diversity Annual Report 2020 can be viewed by clicking the link.

If we continue to shallowly look at gender, there are industries dominated by women as well where men are considered the minority. Minority Nurse reports that approximately 9.1% of Registered Nurses (RNs) and 7.6% of Licensed Practical Nurses (LPNs) are male. Additionally, Washington Post reports that women now outnumber men in medical schools, but the industry is a different story. In their report, they state that “male doctors still outnumber female doctors, 64 percent to 36 percent, according to 2019 data from the Kaiser Family Foundation.” These are just examples of diversity issues with gender, but issues of diversity in industries heavily impact minorities, especially in leadership positions. In this infographic, the researchers state that while minorities do occupy positions of management and senior executive teams (25% White women, 9% men of color, 5% women of color), currently white men (statistically) occupy 61% of these roles. They state that this is a disproportionate representation of these groups compared to those who possess a college or advanced degree.

What Are the Most Segregated Jobs in America? by National Geographic

From bioengineering to winemaking, women advance in dozens of careers by LinkedIn

Celebrating diversity and inclusion across industries doesn’t have to be a race or gender war. What we want to ensure as business leaders is that we are creating equal opportunity for hiring and promotion so that we remain equitable and on the high road. The faster we can accept the truth that most industries are biased and skewed, the faster we can start to come up with solutions. Ask yourself if you’re in an industry that is inclusive and full of equal opportunity. Ask yourself if your company is inclusive and equitable. You don’t have to have the answers to solve this. Let’s just start talking about it.

There is so much that makes us diverse, and most of those things you can’t even see on the surface. While the world is heavily focused on gender and race diversity, because we need to make the workforce more equitable in several industries, that doesn’t mean we have forgotten about all that makes us diverse. You are unique through your values, beliefs, personality, religion or creed, sexual orientation, communication style, education, habits, marital or parental status, geographical location, and so much more. While the discussion is heavily focused on gender and race, with statistics showing that increasing these diversities may likely increase profits and innovation, that doesn’t mean those are the only things we need to talk about in our organizations. We do need to drive the conversation on diversity, inclusion, belonging, and unconscious bias, but making these changes will take time and starting today isn’t too late.

I would like to make a personal note here that we are not trying to say that any race or gender is better or worse than another. We fully believe, as does the research, that we are all important and have something to offer our teams. If you feel triggered by reading this post, please ask yourself why. Perhaps you have identified some unconscious bias. I want to remind you if you are feeling negative by this post that you are still important. You matter. When we talk about uplifting others, that doesn’t mean pushing you down. What’s equitable for others may not be for you, and that’s okay. We all deserve the same access to opportunities because we are human. From there, let people prove themselves. If you would like to discuss coaching through any issues or negativity you feel, contact us.