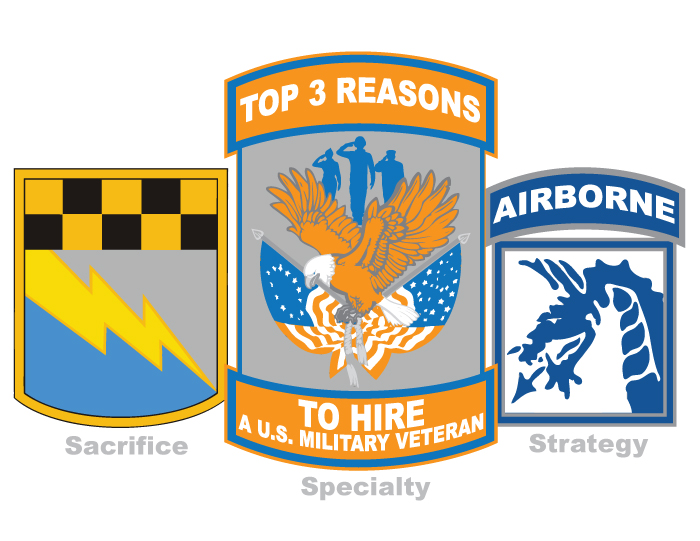 The Top Three Reasons to Hire A US Military Veteran

With Memorial Day approaching I am reminded of my time in service to our country.  As an immature 18-year-old with very little direction, I chose the US Army over college and made my first real mature adult decision.  During my time in the Army I learned three distinct things that have remained a foundation of who I am today: Sacrifice, Specialty, and Strategy.

Sacrifice began the day I rode onto base at Ft. Sill Oklahoma.  Back in the 80’s I had longish hair, was full of bravado, and knew everything there was to know about life; then I met a Drill Sergeant.  In a matter of two hours I lost my identity, my bravado, and my hair, and this was the beginning of my personal sacrifice.  After moving to my housing unit and meeting my new teammates in C Company, I began to understand that life as I knew it was over.  Every day through boot camp was a struggle, as the Army re-made me into the soldier I had signed up to be; a 31 Victor assigned to 18th Airborne Corp.

Sacrifice continued through basic training into AIT and then Jump School, where the team environment continued to be honed into the next thing that became obviously important: Specialty.  Along the way each soldier is offered opportunities to excel and be recognized.  During that journey you see others striving to overcome and sacrificing in their own ways and say to yourself, “I can be that good, or better.”  Specialty began with shooting, being an Expert or Sharpshooter is a really cool designation when in your mind you’re working to just stay alive during Basic.  In AIT we had competition to finish top of class.  We had learned through Basic that how we perform has a direct impact on our Rank and Responsibility within the Army.  When we reached Jump School, we understood that we would be paid more if we were in an active Airborne unit, so having that specialty offered us not only the opportunity to make more money but also the chance to be more distinguished. (Airborne soldiers wore maroon berets and jump boots. In the 1980’s, the only soldiers to wear berets were Airborne, Rangers, and Green Berets.)

It took over six months to get through Basic, AIT, and Jump School.  Through this all we began to interface more and more with regular army soldiers and officers, and learn the day to day training and planning that was going into making us a team. We also learned where our place would be in the overall strategy.  At first no one really outlined what was happening as strategy, but the critical thinking skills we were forced to use employed strategy every day.  Solving issues and prioritizing became a daily function.  Relying on your team to do what they were responsible for, so that the team could succeed, became expected and the norm.  Interfacing with different troops as we trained in locations foreign to us, based on discussions we had prior to ever landing, was the truest sense of strategy we had.

As I became an Airborne soldier I began to change.  I began to think and observe differently.  I noticed my teammates were going through the same changes that I was; they each had their own personal sacrifices, they each had learned a specialty that we all relied on, and they each contributed to the overall strategy of the day.

I applied the lessons I learned from the Army to my life.  During my military career I understood the value of education and balance, so I went to school.  I remembered the value of passion and went back to playing baseball.  I understood the value of Sacrifice and took on learning as much as I could, giving up some freedoms that basic civilians enjoy, to better myself.  I also learned how to think strategically and adapt to have a personal strategy.

Today, as I look back on the almost 30 years since I was a soldier, I am reminded of the lessons.  I apply those three words into the interview process for our firm, sometimes indirectly.  However, what I know is that a majority of the people in our firm have either been in the military or are related to someone in the military.  Each person has a deep understanding of Sacrifice either through personal effort or in supporting a veteran through their personal effort.  Each veteran has a deep understanding of Strategy, to the point where it can be subconscious.  Each has been taught a Specialty and knows what it takes to focus on learning specialty traits, and how to apply them in a team environment.

So, if you’re looking for team members that will help your organization grow, who are not afraid to give a little more than what you may expect, understand that success requires a strategy and appreciates the need to specialize and be good at all you do. Consider employing United States Military Veterans.

Dr. Brian Smith is the Senior Managing Partner and Founder of IA Business Advisors. Brian served in the US Army as a 31 Victor assigned to the 525th Military Intelligence Brigade (Airborne)