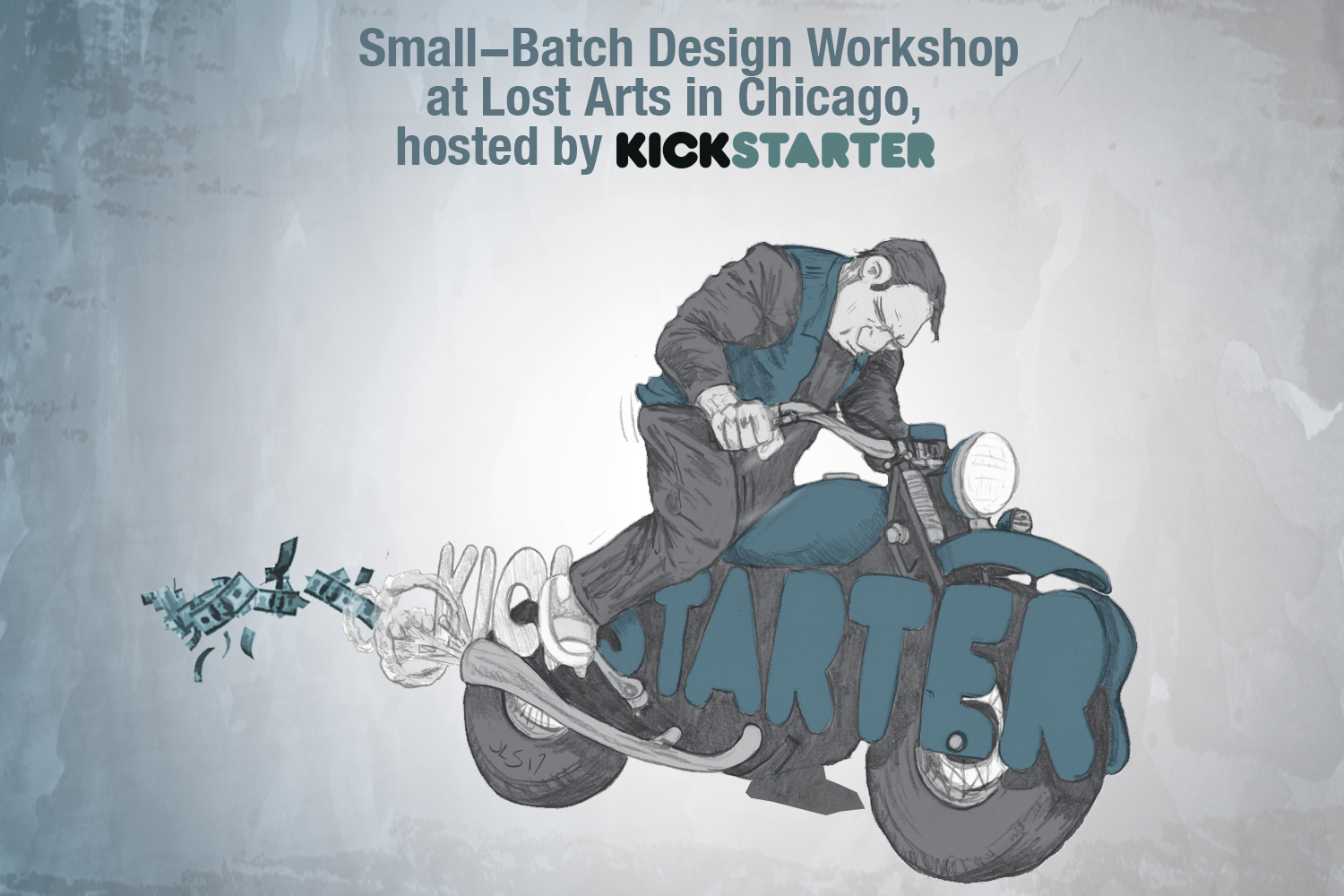 Kickstarter hosted a super cool all-day workshop on Saturday, September 16 at Lost Arts on Goose Island in Chicago. Leading the discussion was Craighton Berman, who teaches a course at UIC dedicated to launching successful projects on Kickstarter. He took his year-long curriculum and shared it with attendees in this 8-hour workshop. Also in attendance were several staff members from Kickstarter who shared their best practices and success stories. Towards the end of the day, they hosted a food truck and participants got to mingle with several successful Kickstarter Creators.

Among the things we focused on were:

Why companies use Kickstarter varies. There’s the obvious financial component to it. BUT, many brands and companies are leaning on Kickstarter to reach a new market, gain exposure, qualify ideas, test branding or messaging, or launch new products out of existing companies.

One of the companies discussed was Freitag. In 1993, graphic designers Markus and Daniel Freitag were looking for a functional, water-repellent, and robust bag to hold their creative work. Inspired by the multicolored heavy traffic that rumbled through the Zurich transit intersection in front of their flat, they developed a messenger bag from used truck tarpaulins, discarded bicycle inner tubes and car seat belts. This is how the first FREITAG bags took shape in the living room of their shared apartment – each one recycled, each one unique. This is a super successful company. Already established. THEY ARE USING KICKSTARTER. They’re launching a new line of bags and are using Kickstarter to verify the market acceptance of their idea. BRILLIANT. And, their kickstarter video is quite comical!

One of our clients is using Kickstarter to launch a brand-new product. Loop the Fruit is a board game designed for children between the ages of 5 and 12 and helps with memorizing bible verses related to the “Fruits of the Spirit”. They already have quite a network of people interested in their game, but they want to use Kickstarter to expand their reach. Whenever someone backs the project, they have an opportunity to share the game on Social Media. Exciting! Want to watch the Kickstarter Video or back the product?

Probably the most important part of using Kickstarter is to start with a well thought out idea. This idea should be something you’re passionate about, have a clear point of view, and a solid process of taking orders, manufacturing product, and fulfilling the orders.

Craighton suggested many ideas for Kickstarter that took shipping constraints into consideration and they quickly decided that using a crowd funding platform like Kickstarter might not be the best way to verify an idea. Shipping things like bulky furniture, for example, are challenging. This makes the fulfillment component very hard to forecast.

One of the biggest takeaways from the entire event was the advice Craighton gave about finding the right idea. He said, “You need to find something you’re truly passionate about AND something you have a unique point of view on.” He went on to explain that running a project through Kickstarter, let along building a long-term viable business, is hard, and keeping the fire going without passion is tough.

If your project consists of a tangible, manufactured product. Then you NEED to understand Small Batch Sourcing. SBS is a term used to describe finding manufacturing partners who will help you fulfill your first orders. They should be able to discuss your idea with you, help you through the details, and deliver a prototype. Don’t necessarily shy away from companies who charge for prototypes. Charging for prototypes doesn’t make the company bad. In fact, it might mean they value their time and know they’re going to produce a high quality product.

Our suggestion for SBS is to find a manufacturing partner with a track record of success. Asking your connections in a similar space for their recommendations is a great start. Don’t expect all the companies you come across to have a fancy website and tons of people working there. They may. But, if they’re into Small Batch Manufacturing, they may be low tech.

Perhaps the most important part of the entire discussion on Kickstarter is the budget. How much is it going to cost you to do all the things you want to do, produce your product, ship your product, and how much do you want left over?

One of the companies that is in some hot water over this is Coolest Cooler. They are (as of the time I’m writing this article) unable to fulfill their orders. Many spectators blame it on poor budgeting, but there are always multiple sides to every story.

Giving your backers the right reward and asking for the proper amount is vital to your project’s success. There are many ways to approach rewards. Many first time creators have a vision for using Kickstarter’s reward options as a way of having a way to sell their products, so all their rewards are the actual products. However, many successful creators lean away just selling their product. They have complimentary rewards like wristbands, posters, T-Shirts, and accessories.

Staggering your rewards is important. Staggering means having several low entry points helps your project. Really, you should want as many backers as possible. Not necessarily tons of money. The more backers you have, they more exposure your project gets, which means you’ll have a much bigger audience. So, have multiple options for rewards less than $5 or $10 so you can capture some of the smallest investments.

Telling your story and creating a video is part and parcel for launching a successful Kickstarter project. Craighton suggested that the quality/investment in your video should match your branding and your financial goal. If you’re seeking a goal of $1 Million and your video was shot on your iPhone, this makes for a confusing message to potential backers. Likewise, if you’re seeking $5,000 and your video looks like a high-end movie out of LA, it could also disway backers from accepting your project.

The story behind the project needs to be critiqued, reworked, edited, presented, retooled, and then refined. Tell about your personal mission with the company/product. Talk about the research you’ve done. Explain the process you’ve gone through to get to this point. All the background that goes into 1) how you go here 2) why you’re here 3) what you’re trying to accomplish – will help your story.

Launching your campaign can be exciting, exhilarating, and nauseating. It’s a daunting feat. You might be asking yourself questions like, “Okay. I launch the campaign. Now what?”, “Am I annoying people with all my messaging?” and, “I don’t know what else to say about my product/company. What do people want to know?”

Campaigning is about all the work that goes into launching one and continuing your efforts during and beyond the campaign. Having a well thought out Global Communications Strategy is key to making sure your campaign energy lasts.

So, you’ve finished your campaign. Now what? Hopefully you’ve thought about this moment. ???? The steps after your campaign is complete are just as important as all your work leading up to it. You’ll need to get order fulfilled, communicate with your backers, add some positive PR, and even consider another Kickstarter.

Want to know even more about Kickstarter and how it might be able to take your idea to the next level? Contact us! We’ve worked with several companies who have launched successful campaigns and we’d love an opportunity to discuss yours with you.