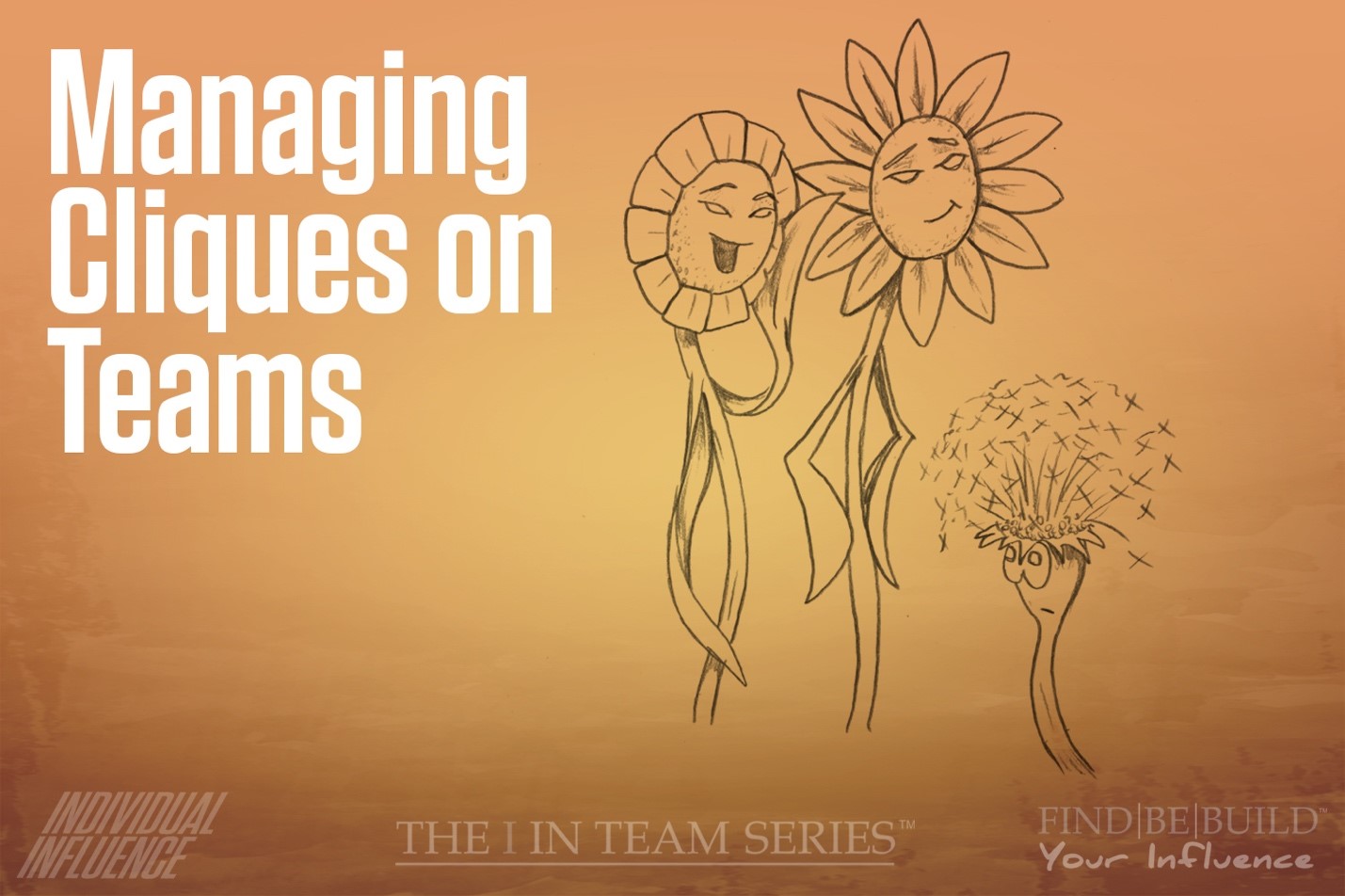 Hi, team! It’s your friend, Mary, with the I in Team series where you can find, be, and build your positive influence. One example of leaders being tested on their ability to create and maintain a positive company culture is when we see cliques develop on teams. Grouping with those who are like us is only natural since we tend to gravitate towards those who are like-minded; however, cliques can put a strain on the team environment. As people may begin to feel left out, leaders must remain cognizant of their surroundings to ensure team culture and morale remain positive. Groups should not be separated or defined by race, gender, sex, age, or any other feature that makes us diverse. Teams should be defined as individuals working towards a common goal, and to do this, leaders must diligently manage cliques on their teams.

Issues with Cliques on Teams

One issue with cliques on teams is that those cliques are automatically labeled with assumptions. Those assumptions, unfortunately, can become the definition of each person in the group rather than the people themselves or what they truly believe in. We begin to look at them as a unit—as one mind all thinking the exact same thing. This poses a problem to company culture, as you want your company culture—rather than smaller cliques—to define your team. It’s only natural to feel like you want to belong. However, the group you should feel like you belong to is your entire team or maybe your department, but hopefully not a small subset/clique of that team/department.

Another issue with cliques on teams is that they divide us and can have an impact on whether a person is a positive influence, a great team member, or a diligent worker; what we need to always remember is that what matters is what is on the inside and how that person decides to use their influence. Positive leaders will not care about superficial things or things that separate us, and they will work to find quality team members who promote the company’s culture and fill the position to the best of their capabilities.

Dealing with Cliques on Teams

Leaders must call cliques out to break them up when they see them begin to negatively influence the team (even if it’s just a few team members). How you interface and address cliques on teams will be imperative to growing and developing your company’s culture. I want to point out the obvious exceptions here. It’s natural for departments to group (as briefly mentioned earlier); for larger companies, when departments are formed, those departments usually assimilate and band together as they spend all their time working towards the same goals. However, it’s when those departments become an outright clique—meaning, they reject others who are not part of the department and behave rudely towards them through dismission—and that clique starts to impede on the positive company culture that it becomes an issue.

To help dissolve the clique, considering performing some team building exercises or schedule some time for the team to spend together outside of work (for example, going to a pumpkin patch or apple orchard in the fall). Cliques typically form when they realize they have something in common that others don’t, so they bond over their similarities. This can be dangerous for the team because it could instill an “us versus them” mentality which is counterproductive to achieving goals. When you create an environment where people can get to know each other on a deeper level, you help stimulate a culture of understanding. The goal of this is to dissolve the clique while making it easier for everyone to speak freely and feel that they belong.

Being a leader means protecting everyone on your team from the harshness that can ensue if cliques are allowed to tear down the desired company culture. Use your influence in a positive way to make your team, your company culture, and yourself better. While cliques may not be all bad all the time, it’s better to nip them in the bud early before they become too crystalized to allow any other team member to integrate. Keep in mind that the desire to belong is strong within each of us, and if you wish for your organization to do its best in reaching its goals, you must create a team that makes each individual member feel as if they belong.