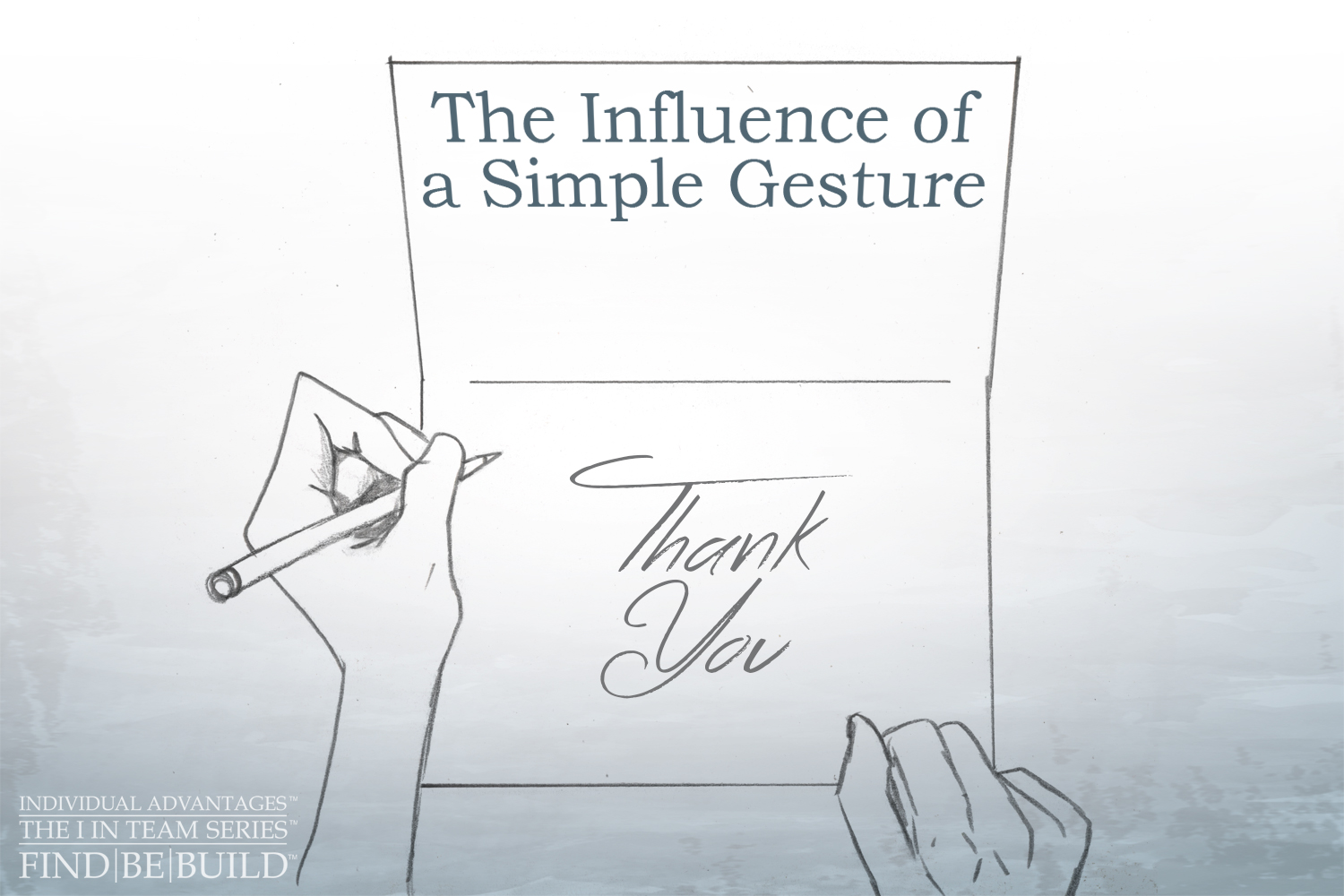 The Influence of a Simple Gesture

Hi team! It’s your friend, Mary, with the I in Team series where you can find, be, and build your positive influence. I have a question for you: Are simple gestures a thing of the past? I’m thinking handwriting a thank you card or note for someone you haven’t seen in a while, leaving an encouraging letter on a co-worker’s desk, holding the door open for a stranger, or even simply smiling at someone on the street. It seems that some individuals have forgotten the positive influence a simple gesture can bring. If you want to be a positive influence, consider bringing simple gestures back into your life after reading the below.

One of the easiest justifications for not performing or creating a positive act for another person is that we are simply too busy. Life is fast paced. We become caught up in our own worlds and next thing you know we’ve missed someone’s birthday or an important milestone. Being a positive influence through simple gestures never has to take a lot of your time, but it will require you to slow down and be more present. Do you understand the influence that small actions have on the overall perception of who you are as a human being

When you slow down just enough to spark positivity in someone else’s life, whether you know them or not, you increase your positive perception in their minds. You may have a perception of yourself that is positive, but the perception you hold of yourself is rooted in your world view. Others perceive you quite differently; that’s why some people love you and others dislike you. Furthermore, if you spark positivity in someone’s life, you are giving them some of your energy to be used elsewhere. Your influence ripples out from you. If you set the example, slow down, and offer sincere, positive, simple gestures, others may follow you. This creates a chain reaction of positive events, something we need more of.

By becoming the catalyst for positivity and overall positive influence, you create a reputation for yourself. Not only do you create a reputation for making others feel good, but they will most likely want to be around you and develop a relationship. When you can uplift others with your positive influence, you not only show others who you truly are but you, again, set the standard for behavior. While not everyone is the same, meaning not everyone’s positive influence looks the same, this still sets the precedent that we should try to instill positivity in others’ lives, whatever that may mean to us and however we may do that. Using simple gestures to demonstrate positivity takes minimal time and energy out of your day and means the world to others.

Don’t Take Others for Granted

Often, when we forget about simple gestures, like saying please and thank you, or hello and goodbye, people may feel taken for granted or forgotten. It’s easy to take things personally, and others may not be so easy to let you off the hook for making them feel undervalued. Taking others for granted, whether it be the tasks they perform, the energy they bring, or even their daily routine, can cause negative influence. Respecting others’ time and the value they bring to the team can only bring positive influence and make them feel like they belong. Remember your influence when the fast-pace of life tries to force you to take those around you for granted.

We could all use a little more positivity in our lives, and one way we can do that is by performing simple gestures. Don’t mistake this as a giving only exercise; by giving positivity to others and seeing how your positive influence affects them, that brings you back positivity, too. All that is needed to create a positive experience for yourself and your teams through the use of simple gestures is to slow down, remember your influence, refuse to take others for granted, and choose one thing per day on the list above. Can you imagine a world where people slowed down just enough to care about how they influence others? I can, and it’s a much more beautiful world. We can create that together. It starts today, with you. Are you ready to be a positive influence?