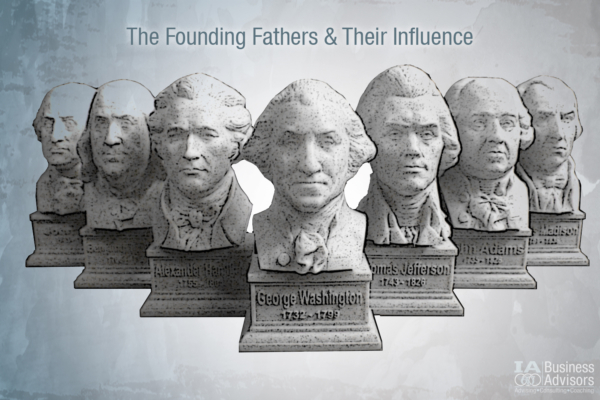 The Founding Fathers & Their Influence

As we have just celebrated July 4th, our nation’s 243rd year as an independent nation (in terms of how we choose to celebrate, even though it’s not completely historically accurate), we want to shed some light on some of the most influential people who founded our nation as we know it today. But first, a short history lesson.

In 1776, our Continental Congress declared our independence from Britain on July 2nd. The day we started the revolution was back in April 1775. However, July 4th wasn’t the day that Thomas Jefferson wrote the first draft of the Declaration of Independence (which was in June 1776), or the day it was signed (August 2, 1776), or the day it was delivered to Britain (November 1776).

Our Founding Fathers united the thirteen original colonies, led the war of independence from Britain, and built a frame of government for the new United States. Our key Founding Fathers, although there are more, consisted of: Benjamin Franklin, John Adams, Alexander Hamilton, John Jay, Thomas Jefferson, James Madison, and George Washington. These seven key Founding Fathers were identified by renowned American historian Richard B. Morris in 1973. While there were certainly more, these seven made the largest and most important contributions.

Franklin was well-known for being the only Founding Father who signed all three documents that freed America from Britain (the Declaration of Independence, the American Constitution, and the Treaty of Paris). Unlike several Founding Fathers, Franklin began his career as an artisan with minimal (two years) formal education. Franklin came from, essentially, nothing, and through his charismatic ease and strive for public servantry, rose to become one of the most significant figures in American history.

One of Franklin’s first public projects was organizing a block watch in Philadelphia, and raising money to pave and clean his cities roads. His projects from this point increased in ambition, including pensions and welfares for widows. Among several other projects, Franklin helped build the University of Pennsylvania, raise money to build the nation’s first hospital, and he did both of these things for middle class and below who could not afford care or institutions for themselves. He began his projects long before governments began to provide services for citizens.

As a scientist, he proved, most famously, that lightening was electricity, invented bifocal glasses, charted the Gulf Stream, invented a clean burning stove, and proposed theories on why common colds are contagious. However, Franklin wasn’t the only influencer in his family. His brother, James Franklin, is accredited for being one of the most important journalistic influences who fought for freedom of journalistic speech in America.

Adams was the first of three sons in a Puritan family. At the age of sixteen, he went to Harvard college in 1751. He taught school for a few years after graduating in 1755, against his father’s wishes for him to become a minister. He later decided to further his schooling and become a lawyer, being admitted to the bar in 1758.

Although John Adams was not as popular as his second cousin, Samuel Adams, he produced influential work as a constitutional lawyer. Even through this influence, he found his contentiousness to be an inhibitor in his political career.  Early on, he became involved in the patriot cause, acting as a delegate for the First and Second Continental Congresses, which led to him leading the movement for independence. During the Revolutionary War, he acted in a diplomatic role in France and Holland to help negotiate a treaty of peace.

Adams served as Vice President under George Washington for two terms, going on to be our second President of the United States. During his years as vice president and president, a debate raged across the US over the proper size and function of the federal government, where two political parties emerged. Adams aligned himself with the Federalists, who favored a stronger central government. The opposing side, the Democratic-Republicans, were more egalitarian and favored limited federal authority. Adams, after alienating members of both parties, left his presidency bitterly.

Hamilton was our country’s first Secretary of the Treasury (he’s even on our ten-dollar bill!). During the Revolutionary War, he served as an aide to George Washington. Once Washington was President, and Hamilton Treasurer, Hamilton believed in a strong central government and led the Federalists. This is where one of his most famous feuds with Andrew Burr began.

Burr was one of the leaders of the Democratic-Republic, along with Jefferson, and the Federalist’s ideas did not appeal much to the new Americans. When Burr lost the election to Jefferson and became vice-president, Hamilton created the New York Post and developed an intense dispute with Burr. This eventually led to the famous Hamilton-Burr duel, which ended in Hamilton being shot. A day after the duel, Hamilton died of his gunshot wounds.

During the signing of the constitution, Hamilton was the only delegator from New York to sign, as the other two members had already resigned. He didn’t completely approve of the constitution in its final draft, but agreed that it appeared to be better than the Articles of Confederation (a document that organized the thirteen colonies during the Revolutionary War).

Jay, a New York native, drafted the state’s first constitution in 1777, and was chosen to be president of the Continental Congress a year later. He served as a key negotiator at the Treaty of Paris, ending the Revolutionary War, as well the first chief justice of the U.S. Supreme Court and was the second governor of New York.

Jay hailed from a wealthy family in New York City. Beginning his career as a lawyer in 1764, after graduating from King’s College (now Columbia University), he entered the world of New York politics and was elected to the first Continental Congress in 1774. During his time in congress, although he was not a loyalist to Britain, he did promote a peaceful resolution instead of independence from Britain. He urged the British government to reconcile with the colonists.

Jay was part of a five-member commission tasked with negotiating the Treaty of Paris, along with Franklin and Adams. Jay was a Federalist, like Hamilton and Adams, and wrote a series of essays under the pseudonym “Publius” in 1787 and 1788. These were known as the Federalist Papers and they helped shape much of the Constitution as we know it today.

Born in 1743, Jefferson became a founding father by signing the Declaration of Independence as a representative from Virginia. Later, in 1785, he served as a diplomat in Paris. In 1796, he served the U.S. as vice-president and later became President in 1800. During his presidency, he oversaw the purchase of the Louisiana Territory and ordered the Lewis and Clark party to explore west.

Along with being a founding father, Jefferson is considered one of the leaders of the Enlightenment (a period in the 16th and 17th centuries, marked by intellectual and scientific advancement). He spoke five languages fluently and was skilled in science, architecture, philosophy, and religion. After his presidency ended, he founded the University of Virginia.

Although publicly against slavery, Jefferson did have slaves. It is documented that he tried to reconcile this irony by treating his slaves fairly and he did not require more work from them than any free farmer would produce. He has six children with a slave in Monticello, and in 1807 he signed the ban of importation of slaves into the U.S. He, as well as Hamilton, passed away on the 50th anniversary of the signing of the Declaration of Independence.

Born in 1751, Madison is known for his political philosophies, participation in the Constitution, and as our fourth President. He is often referred to as the “Father of the Bill of Rights” as he was the author of the first ten amendments of the Constitution. He thoroughly believed in a system of checks and balances, and that it was every government’s duty to protect individuals from potential tyranny on behalf of a majority.

From a young age, Madison worked to establish religious freedom in his home state of Virginia. He notably defended Baptist Preachers against charges issued by the Anglican Church. His continued work for freedom of religion led to the creation of the Virginia Statue for Religious Freedom, which removed the Church of England from a position of power over the colonies.

After the Revolutionary War, Madison proposed a three-pronged approach to our federal government, a system that is still in use today. He was a Democratic-Republican that believed the government should be able to overrule individual state mandated law when deemed incorrect or unjust for the people. He served as Jefferson’s Secretary of State and directly oversaw the Louisiana Purchase.

As the first President of the United States, George Washington, in fact, did not sign the Declaration of Independence. The reason for this is because he was in New York in July 1776, preparing to defend Manhattan against the British. However, he did play a key role in drafting the Constitution in 1787. He has been consistently ranked as one of the greatest U.S. Presidents and received the first Congressional gold medal.

He was born in 1732 in Virginia. Being educated at home, he began his career as a planter of tobacco and was later appointed as the surveyor of his county. Later, after serving the militia for several years, in 1774, he was appointed as a delegate to the first sitting of the Continental Congress. He led the Continental Army against the British in hopes of taking back New York, and, although he was defeated, he did have victory in New Jersey and Trenton.

Both in 1789 and in 1792, under the electoral college, he is the only President that has ever received 100% of votes. He denied a salary as President and wished to serve the nation as a pure public servant. He served a second term as President, reluctantly, and refused to serve a third. This is what led to, later, being customary policy and law for a President to only serve two terms.

Influence, as defined by us and The I in Team Series, is the greatest responsibility we have as human beings. Our Founding Fathers, many of which are not listed here, had tremendous influence on how our nation is conducted today. We can celebrate their successes and appreciate their efforts in influencing our nation.