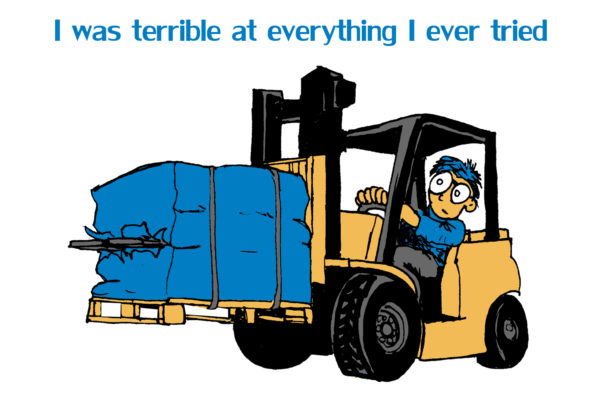 I was TERRIBLE at Everything I Ever Tried

That may sound like a self-deprecating comment, but it’s not. I truly was awful at every job I have ever started. But that’s okay, at least for a little while. Understanding you might not be great at something at first is the beginning to the pathway to greatness. It’s the yellow brick road to something better. Go ahead, jump in! Don’t wait for all the stars to align. Don’t wait for the right time to take action. Just do it. Successful people start projects without all the answers, take jobs they aren’t qualified for, and start companies without having all the pieces in place. Their ability to take risks, and not worry about failing, is what sets successful people apart from everybody else. If you think that’s crazy, you’ll want to keep reading.

I started my career in the Marine Corps (can I get an Oorah?!) I remember being introduced to their “70% rule”. The 70% rule states that you implement a plan when everything points to at least a 70% chance of success. The other 30% is held in reserve so that you can improvise for, adapt to, and get over any situation. If an organization as successful as the United States Marine Corps embraces the fact that it’s more important to act than to wait for a perfected plan, I feel it bears some weight.

The 70% rule states that you implement a plan when everything points to at least a 70% chance of success.

The other 30% is held in reserve so that you can improvise for, adapt to, and overcome any situation. If an organization as successful as the United States Marine Corps embraces the fact that it’s more important to act than to wait for a perfected plan, I feel it bears some weight.

My first job out of the Marine Corps was as a laborer at a sawmill. It was the lowest possible position and I wasn’t even qualified for it. I remember pestering the front office lady every day for a month and a half about a position. When a position opened, they advertised it as “Experienced Planerman Wanted.” A Planerman is a highly sought after apprenticeship program. It’s almost always only for those with years of experience in multiple facets in the sawmill. Regardless, I was granted an interview. I wasn’t sure if the front desk lady wanted to make an example out of me or truly thought I had a chance. Either way, I’ll never forget the interview with the hiring manager: The Foreman. It went something like this:

Foreman: “How many years’ experience do you have as a Planerman?”

Foreman: “Have you ever work in a mill?

Foreman: “Then why should I hire you?”

Me: “Because I’m the hardest worker you’ll ever meet.”

I was accepted into the program, on graveyard clean up duty. Not the most glamorous position, but I didn’t care. I was in the program. I worked my tail off. And you know what? Hard work gets noticed. Over the next few years, anytime someone called off work, I was the go-to guy that would fill in. No matter what they asked me to do, I would always answer in a positive and affirmative manner. One time, I got asked if I can drive a forklift. I responded, “I can learn!” I knew I could figure it out. I approached all these new challenges with a little bit of ingenuity and the mindset that any mistakes were part of the learning process. By the end the program, I knew how to do everything in the whole mill. I was graduated as Plant Quality Control and Relief Supervisor. I credit it all to my willingness to throw myself at any opportunity.

“Everybody has a plan until they get punched in the mouth.”

Mike Tyson’s quote is actually quite insightful. He’s saying that no matter how great your plan is, you will always need to improvise. You will always face adversity.  Embrace that and be flexible.

Throughout my career, I have held positions in engineering, factory production, consulting, sales management, finance, hotel operations, warehouse operations, and as an entrepreneur. What do all these positions have in common? Nothing. Well, other than the fact that I was willing to give something a shot because I had at least a 70% chance of success. I knew I might be really bad at something, but I could learn and grow. For me, the rewards for taking a shot and being outside my comfort zone far and above outweighed the risks.

With each new career opportunity, I was humble and admitted when I failed. But I always had a willingness to learn from my mistakes and try again. When you learn on the job, there’s always a chance of failure. You may not learn as fast as your boss wants, but that’s the risk successful people take! It’s what makes them great. The funny thing about failure is that people notice and they want to see how you react.

“Success is stumbling from failure to failure with no loss of enthusiasm.”

I feel that people are inherently good and want to help. Actually, I’ve found that it’s against human nature to consciously decide not to help someone, especially when they are trying to help themselves. It’s kind of like trying to be mad at someone that has a genuine smile showing. It has been my experience that I was always able to find someone that was willing to mentor me along the way which made the transition to a new field easier. Nobody ever begrudged my success because I was always willing to help others succeed at the same time.

“You can have everything in life you want, if you just help enough people get what they want in life.”

So, while everyone else is busy waiting for the perfect time to act, or waiting until they have the right education, skills, connections, qualifications, or money, take the shot! Dare to go for it. Step outside of your comfort zone. Be willing to be an amazing failure, because that’s how you become an amazing success. It’s completely okay to be terrible at something, but learn and adapt. Along the way, you will find others that are also completely outside of their comfort zone. These people are the ones that realize success is synonymous with persistence and resilience. I want to be surrounded by those types of people.

“A failure is not always a mistake. It may simply be the best one can do under the circumstances. The real mistake is to stop trying,”

“I can accept failure. Everyone fails at something. But I can’t accept not trying”

“Nothing in this world can take the place of persistence. Talent will not: nothing is more common than unsuccessful men with talent. Genius will not: unrewarded genius is almost a proverb. Education will not: the world is full of educated derelicts. Persistence and determination, alone are omnipotent.”