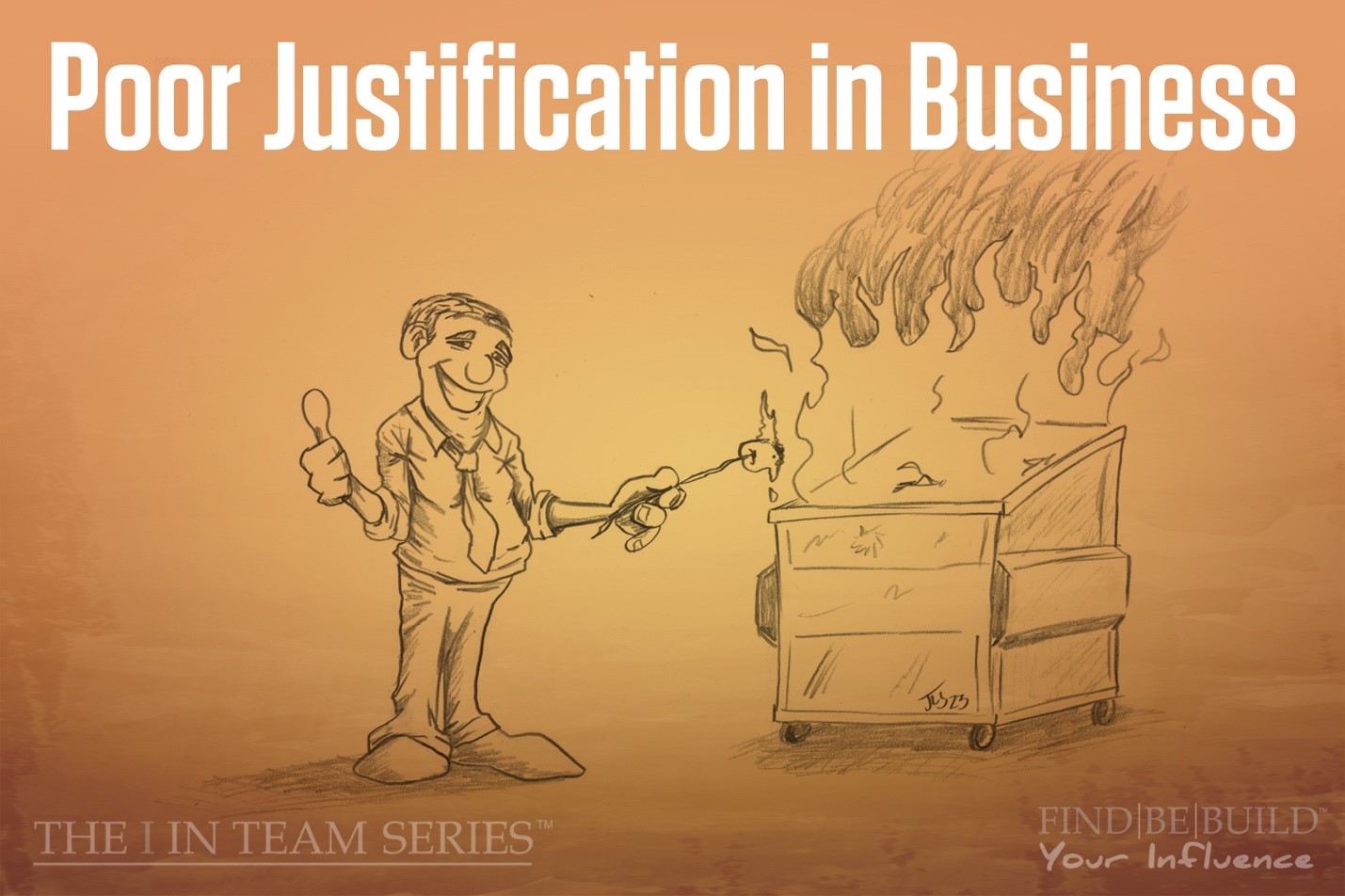 Hi, team! It’s your friend, Mary, with the “I” in Team series where you can find, be, and build your positive influence. Welcome to 2023! Let’s start this fresh chapter off on the right foot and discuss something that happens frequently in business: Justification for poor actions. Justification in itself is not always a bad thing, but if it is used to avoid accountability or to excuse poor behavior, then it is not a positive. Poor justification in business can destroy even the sturdiest of relationships, and, in rare cases, dismantle an entire organization.

Justification in business is used daily. Most circumstances are controllable, and those that aren’t are an exception to the rule. For example, if you miss a deadline and don’t communicate prior to missing the deadline that you don’t have the bandwidth to achieve the deadline, you will have to justify why you missed the deadline and that excuse will likely not be justifiable. However, communicating prior to missing the deadline in order to make your goals S.M.A.R.T. avoids the need to justify and ensures team members all remain on the same page.

Businesses rely on the ability of their employees, contractors, and vendors to perform. If you find these people justifying their actions when they fail to do what they have promised, you allow justifications to stand unquestioned which can degrade culture. Communication is key, and there are always exceptions to the rule. You must identify when these justifications are legitimate or if someone is just trying to get out of accountability. Allowing employees, contractors, and vendors to underperform by accepting their justifications without question impacts your entire organization.

As a leader, part of your job is pointing out that X circumstance or Y claim is not your problem and should not become your problem (unless it is an exception to the rule). By accepting justifications, you are making their problem your problem. Consequently, you will now have to justify your company’s inability to perform to someone else, and you may be the one who loses the sale/customer/relationship because of another person’s actions. This is where your leadership is applied. The sooner you can eliminate the use of justification in business to cover up for poor performance, the sooner you will be able to amend the negative process and provide a positive experience for your team and customers.

This example is written directly from Brian Smith, co-author of the “I” in Team series.

To give you an example of this, one of our companies has seasonal products that are planned out in advance of each season. One of our vendors, who is our manufacturer/supplier for a certain product, has been aware of our seasonal trends and needs since 2010. In 2015, this vendor missed a key delivery date during our busy season, putting us and our customers at risk. He justified missing his delivery date by blaming his suppliers. However, he failed to communicate to his suppliers that his business was growing and would have more demands. Instead, our vendor decided to burden all his clients with poor planning by altering his manufacturing schedule and not communicating this to anyone.

As COO of the company, I was notified within three days of the vendor missing his delivery deadline. Upon review, I noted that we had placed our typical order at our typical time and were not notified about any delays. I also found out that this vendor had missed several delivery dates in the nine months before this incident. I didn’t find out about the other missed deadlines because our team willingly participated in this vendor’s justification, choosing to uphold personal relationships instead of policies and procedures. After learning this had been going on for nine months, we decided it was time to find a new, reliable vendor.

By early summer, we secured a new vendor. We toured the plant and determined that this company ran at a sustained and planned capacity that ensured sales fluctuations would not interfere with our regularly needed production runs. In July 2015, we placed our first order with our new vendor. They delivered on time and as anticipated. We ceased all further purchase orders to the previous vendor.

Two weeks later, our previous vendor attempted to deliver the order we canceled that was over a month late. His justification for ignoring our cancelation was that we committed to order through the end of summer, to which I responded that our commitment was based on timely delivery and meeting our anticipated demands. I told him that repeated missed delivery dates and violations of his part of our agreement superseded our commitment to buy a certain amount of product through the season. Today, that vendor’s company ceases to exist.

Justifications for poor behavior, communication, or performance won’t always take down an entire enterprise, but they can. You must rely on your positive leadership skills and company culture to steer your employees, contractors, and vendors to use communication rather than justification in business. Justifications should be used sparingly, when they are the exceptions to the rule, rather than “the dog ate my homework” kind of stuff. Hold your team accountable for their actions and inactions to ensure you avoid instilling justification into your company’s culture.