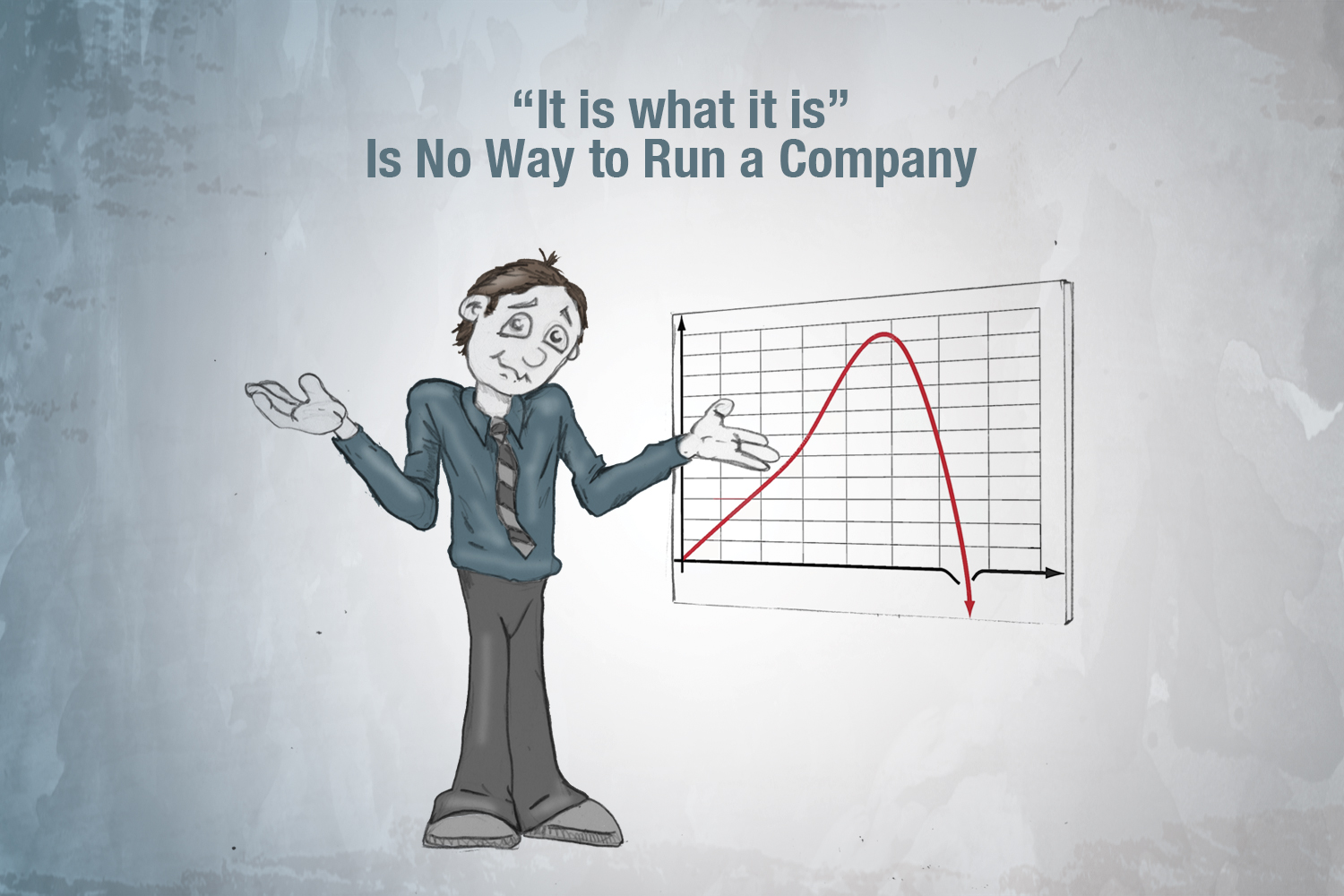 Clichés can be fun to use in conversation and they can identify with business at times; “time will tell,” “fit as a fiddle,” or “diamond in the rough” can all describe issues or opportunities in companies.  However, one of the most recent clichés to be misused in business is this: “it is what it is.”

On its surface, the saying seems quick and witty and will get its utterer nods of agreement by his or her listeners.  But the saying gives in to the current situation and is a verbal throw of the hands to what could possibly be a defining moment for a business.

Clichés such as this have a certain “I give up” finality to them, and when they are used by managers or owners and repeated by staff they stall or eliminate the processes essential for problem resolution that may increase efficiency, lower cost, and raise profits.

If you find yourself using a cliché in an instance when it may not be appropriate, being an owner or manager gives you the intellectual clout to back that statement up with a more positive and forward-looking stance that may better define an action that can be taken, reversing the potential damage done.

An example of poor usage would be in a company where some process or technology is causing issues with staff or customers.  For example, we have a restaurant client that is consistently making special trips to a local food distributor.  This restaurant is attached to a family entertainment center and business varies from day-to-day and even weekend-to-weekend; however, there are a number of consistencies when measured over a longer sales timeline.

Sitting in a manager’s meeting I listened to the General Manager discuss the frequent visits with his Food & Beverage Operations Manager, who in turn asked his Kitchen Manager for a report as to why there were so many special trips for food purchases. The answer was: “it is what it is, you know how inconsistent business is.”

The GM and F&B Manager both nodded their head to the answer, as did the company’s other operational managers. They were all resigned to the practice of making almost daily trips to the local food company, in addition to the regular food deliveries.

The next meetings I attended were the individual staff meetings held by the various managers throughout the entertainment center.  During these meetings, I posed the same question to the staff, hoping to find a champion in the ranks who worked day-to-day with the kitchen, who might have a better answer to this issue.  At this meeting, the manager immediately repeated the answer; “it is what it is, our business is too inconsistent to create a meaningful order for food from one company.”  Heads around the table nodded, as this leader once again used the popular cliché to resolve this very costly issue in the company.

Being that these skilled customer service people really felt that “it was what it was,” I had to find out for myself. The local economy where this client is located is struggling more than many other places in the United States.  The population is smaller, under 50,000 for the entire area, and has some pretty defined trends due to the socio-economic and demographic situations present.

The business has been in operation for 14 years, so we began to trend sales first by month, then by week, and then by day. We learned that buying patterns during certain months, quarters, weeks, and days had clearly defined patterns.  After comparing additional data available, we determined that we could definitively identify trends from past performance that generally held for most of the 14 years.

We attended the next managers meeting and presented our findings to the group.  During the presentation, we identified the historical trends and asked what people thought; they were all surprised.  Asked by the owner what we thought, I replied, “well, it is what it is, so let’s use this information to begin setting new adjustable PARS with our primary food vendor based on this data and see what happens.”

Six weeks later, trips to the local food distributor used to supplement the regular supplier were cut by 80%.  Food cost for the company was down 25%.  The people being tasked with shopping daily could be more efficient with their primary tasks, and food quality improved due to sole source purchases of ingredients.

In a follow-up meeting with management, we reviewed the use of clichés to resolve problems amongst themselves and the staff.  We reviewed how our primary jobs sometimes blind us to resolutions available and lead us toward simple solutions or a dismissal of problems; which thankfully is why IA Business Advisors has a future.

I am not advocating for the elimination of the use of clichés when dealing with issues in your company. However, I am cautioning all managers and owners to use them for the humor or brevity they were intended, and be careful to not use them in a way that could have both a short and long-term negative impact on your employees.