Individual Advantages: Find the I in Team 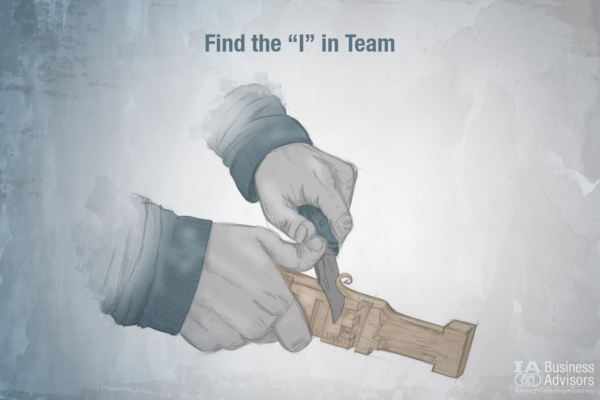 Going too fast can also manifest itself in our personal lives. I have a few hobbies and none of them are such that I focus on them for a long time. For example: I collect stamps, and at certain times I will give specific focus to them and then put them away for years before I even think about them again. Similarly, I like coins, building models, puzzles, reading, knives, and video games. Most of these are just like stamp collecting; I get into them for a while and then set them aside for a longer while.

I have liked knives since high school. My stepfather, Bill, raised me from age 13 on. He was a hunter and had a pretty extensive knife collection. As I got older, I too became a hunter and liked knives. My son, Henry, also likes hunting and knives. (As many of you may know, sons tend to want to be like their dad.) One day I was sitting in the garage with René and Henry, and I was messing with one of my knives. It happened to be one I inherited from Bill when he passed away. Henry, at the time, was about eight. I was managing IA globally and a couple of very high-profile investments in Southern Oregon: a hotel and a family entertainment center. My mind was very much in “subconscious mode” (a.k.a. autopilot) as I whittled a stick and contemplated issues at all three entities. Henry wanted to whittle a stick, too, and brought me one he found in the yard with a request for me to show him in the only way an eight-year-old knows how: persistent begging.

Now, despite my own position on slowing down and it being something I taught day in and day out, Henry was interrupting important thoughts about clients, hotel rooms, and families at our entertainment center. So, to appease my son and the importance of all those immediate things on my mind, I told Henry I would allow him to whittle. René was quick to point out how dangerous it might be for our 8-year-old boy to “play” with a knife; to which I replied in haste that I would teach him knife safety. Don’t worry, I’m his dad.

The next few moments would slow down the rest of the day and continue on into the following week. In my desire to get back to thinking about client problems, and hotel and restaurant operations, I cut off the tip of my finger teaching Henry about knife safety.

Cutting off the tip of my finger is a dramatic lesson on going too fast, and while it’s not typical of what going too fast can cause in our day-to-day lives, the scar on my finger is my own proverbial reminder to slow down. Most of us on a regular basis forget something, leave something unfinished, drop something, or complete tasks in haste because of our need to speed through to another quickly performed task; and so on.

Sometimes it takes extreme examples to get a point across and to remind yourself to slow down. Going too fast manifests itself differently in each of our lives and I hope that I never cut off another part of my body to remind me.

The Importance of a Structured Sales Program

How to Create Organizational Structure